What You Don't Know About
Fish Farming Could Kill You

Over the past few years it has become increasingly evident that fish farming is not going to be the safe answer to providing the world with fresh fish.

There is ever increasing evidence that these operations are poisoning the ocean water around them.  There seems to be a never ending number of incidents of them supplying diseased fish and fish contaminated with toxic chemicals.

The Institute for Health and the Environment at the University of Albany found that farmed salmon contain potentially harmful levels of PCB's, dioxins, dieldrin and toxaphene. The levels of contamination were as much as 10 times that found in the wild salmon.

RAISED ON A FISH FARM!
DO NOT EAT !

The study analyzed 459 whole farmed salmon, 144 fillets of farmed salmon from eight of the major salmon farming regions and 135 whole wild salmon representing all five of the Pacific salmon species.

The fish were purchased in 16 large cities in the United States, Canada and Europe. Samples from Boston, Edinburgh, Frankfurt, London, Oslo, Paris, San Francisco and Toronto were generally the most contaminated. Samples from Denver and New Orleans were the least contaminated and those from Chicago, Los Angeles, New York, Seattle, Vancouver and Washington DC fell somewhere in between.

The levels of contamination found in the farmed salmon in this study are very representative of industry in general. These levels of exposure to PCB's, dioxins, dieldrin and toxaphene are levels which are known to be a cancer risk. Farmed salmon contain almost ten time more PCB contamination than wild salmon.

Two major health risks associated with these toxic chemicals are neurological and immune system damage which may occur at lower exposures than those for cancer.

There are a couple of reasons why wild salmon has such lower concentrations of chemicals than farm raised salmon.

First, and foremost, wild salmon eat a wide variety of organisms such as krill, plankton and small fish while farmed salmon are fed a high fat feed made up of other fish ground into fish meal. This fish meal contains a concentrated dose of any contaminants found in the other fish.

The second reason is that farmed salmon have a much higher fat content than do wild salmon.

Fat is very good at absorbing and holding contaminants for long periods of time. So the PCB's, dioxins, dieldrin and toxaphene are stored in the farmed salmon's fatty tissue and then passed on to the person who eats that fish to be stored in their fatty tissues.

From birth to slaughter, farmed salmon are treated with a wide range of chemicals to protect them from disease. They are raised in very crowded pens, which means that any time a disease starts it is passed along very quickly. So, to ward of diseases, the fish farmers bulk treat the entire population on a regular basis with antibiotics. 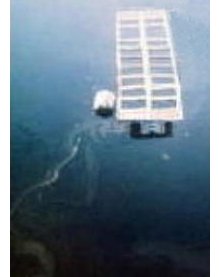 One estimate is that the average salmon farm produces sewage equivalent to a city of 65,000 people, this also is an integral part of their living environment.

Just the thought of eating fish that come from one of these cesspools is enough to repel most people. This as opposed to the wide open ocean environment that is home to wild salmon.

Like all living creatures, fish need to exercise to be healthy. In the crowded quarters of the typical fish farm this is impossible. This adds to the unhealthy condition of farmed salmon.

To get their fish ready for market the fish farmers have to feed their stock a concentrated pink dye just prior to going to slaughter. If they were not given this dye their flesh would be a pale gray which we all know would not be good for sales.

Here in Washington State there is an organization called Wild Fish Conservancy Northwest which is fighting to have the fish farming operations in, and around, Puget Sound removed.

The US EPA advises that people limit the consumption of farmed fish to no more than four meals a year. Compare this to the recommended one or two meals per week of wild fish and seafood and you can understand why we say, avoid "farmed" fish if at all possible.

Is There Mercury In Your Dinner?

A healthy diet includes the fish as a source of essential high protein and other nutrients such as Omega-3. However, nearly all fish and shellfish contain at least a small amount of mercury.

The low levels of mercury found in most fish and shellfish is not enough to be of concern for most people. The exceptions are women who may become pregnant, pregnant women, nursing moms and young children. The reason for these individuals being an exception is that mercury can damage the developing nervous system of a fetus or young child.

These individuals should not eat certain types of fish. They should not eat Albacore tuna, King Mackerel, most shellfish, Shark, Swordfish or Tilefish. If you like tuna opt for the canned light meat variety.

If you like to eat locally caught fish from lakes, rivers and coastal waters check the EPA local fish advisory web site for the most up to date information.

So the bottom line is, check the local fish advisory for information, avoid all fish raised in fish farms and check the labels in the store for the indication that the fish is "wild".


Return to our Organic Food page from our Fish Farms page.

ONLY YOU CAN CHOOSE WHAT GOES ON AND IN YOUR BODY!

Always consult with your health care provider prior to making any change in your medical regimen.

This site is for information purposes only, contents are not intended as medical advise.

Contents of this site may not be used by others without prior written approval.